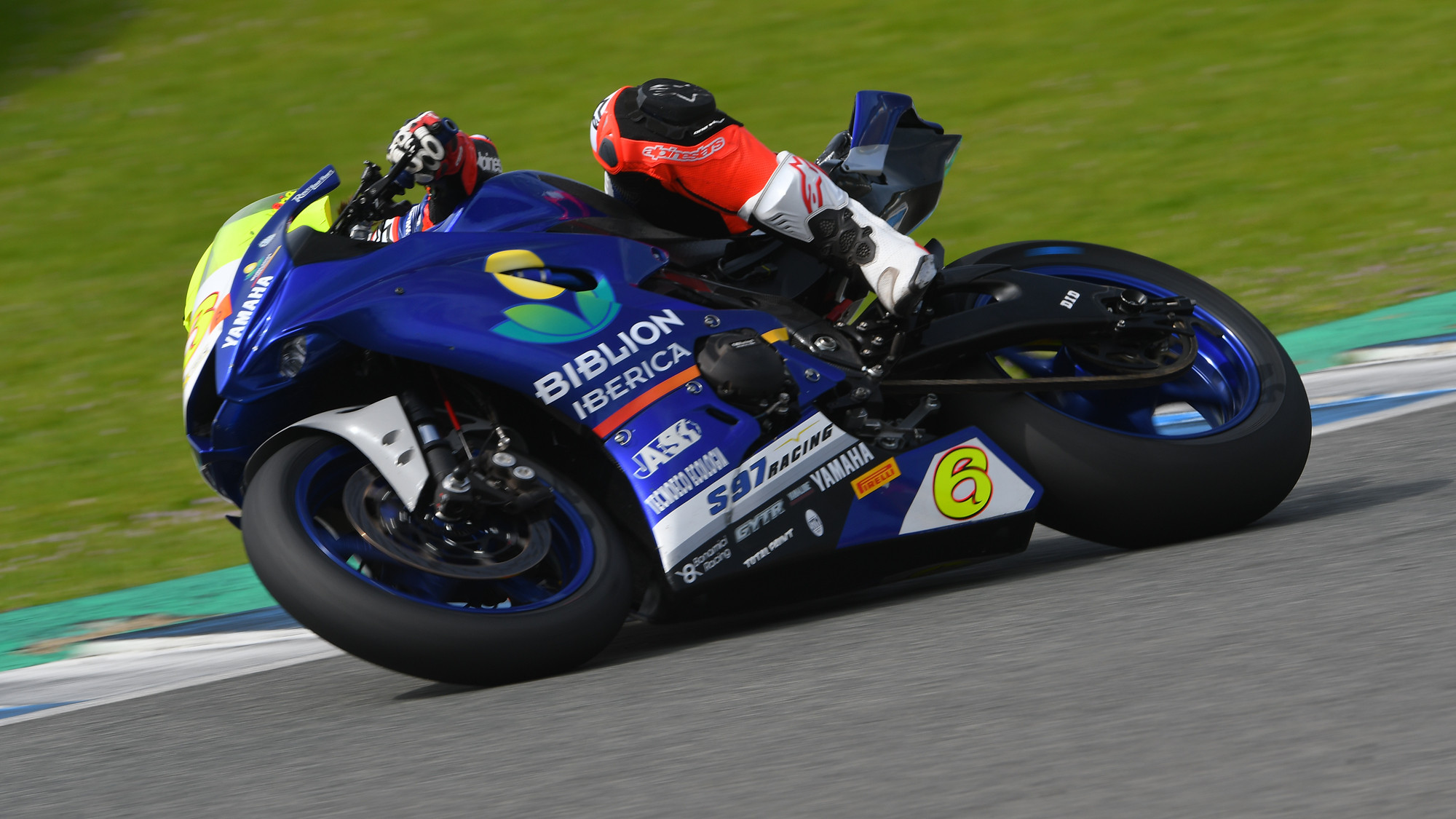 Ongoing preparations for the upcoming 2021 FIM Supersport World Championship and FIM Supersport 300 World Championships are stepping up another gear with the Biblion Yamaha Motoxracing Team with WorldSSP Challenge competitor Maria Herrera joining the team for the first time since she was confirmed at the team, while her WorldSSP300 teammates Bahattin Sofuoglu and Marco Gaggi were also present alongside Championship rival Indy Offer (SMW Racing Kawasaki).

Herrera was announced as competing in the WorldSSP Challenge for the Biblion Motoxracing outfit where they will be an official Yamaha-supported team for the 2021 campaign. She will compete on a Yamaha YZF-R6 and she got her first taste of the new bike and new team as she completed a two-day test at the Circuito de Jerez – Angel Nieto. Herrera was using the test to adapt her riding style and getting back up to speed after she spent the winter recovering.

24-year-old Herrera said: "As far as this test is concerned, I’m serene and happy. In these two days we have done a lot of laps and tackled a lot of issues, we have improved from session to session and I have a better understanding of both the bike and the team. For sure we need to do a lot of laps because it has been a long winter and with my injury, I haven't been able to ride much. So, we have to continue in this direction to get where we are aiming for.”

Herrera was joined on track by WorldSSP300 riders Sofuoglu and Gaggi, from the same team, as they helped developed new components looking ahead to the 2021 campaign. Sofuoglu posted a best time of a 1’53.1s, around half-a-second faster than he managed in the Tissot Superpole for the Spanish Round at Jerez while Gaggi posted a 1’54.9.

Turkish sensation Sofuoglu said: "It was a good test for us, I was very impressed with my team who did a great job after a long winter break. We improved a lot of things on my bike and I improved my mentality. I have changed some things that I felt were necessary and now I can trust the feeling I have with my bike and the power of this 'beast' which is now ready to aim for the top.”

Marco Gaggi: "I'm happy with this test, the feeling with the bike has grown more and more and we have been working on the bike and on myself, improving step by step. I'm happy with the work done, because it was my first time with the whole team, and I felt really comfortable working to perfection. My thanks to them. We must continue on this path.”

Also on track was Britain’s Offer with the 17-year-old focusing on his riding technique and especially braking. His test day at Jerez was one of several planned shakedown tests for the British rider which follows on from a two-week boot camp at Supermotoland in Spain before he linked up with his SMW Racing Kawasaki outfit as he prepares for his second season of WorldSSP300 action.

Offer said: “Supermotoland has been a great way for me to train and prepare for my second season in the Supersport 300 World Championship. Of course, riding on tarmac is different but there are many skills and techniques that you can transfer between disciplines. The best bit was seeing at Jerez the big step that I had made with my braking. My fitness has also improved and the long stints that we did at the bootcamp really helped and I was able to push as hard on the last lap of each session in Jerez as I was at the beginning of the session. My mindset has also improved, I understand the processes of how to go faster, and even though on a Supermoto bike you can’t work on corner speed, the gains on brakes and getting on the power earlier is something that we could see immediately on the data at Jerez. It was good to be back on track with the team at Jerez. Of course, any rider will say that they want to be faster, but the thing I am clear about now is that I know the areas that I still need to improve on and that makes me confident of the season ahead. We have another test planned in Italy and then the Dorna supported test at Catalunya and I will be doing as much private riding as possible. After five months out of the saddle it’s great to be back and I am really happy to be riding with the same team as I rode with last year.”

Follow action from WorldSSP and WorldSSP300 in 2021 using the WorldSBK VideoPass!