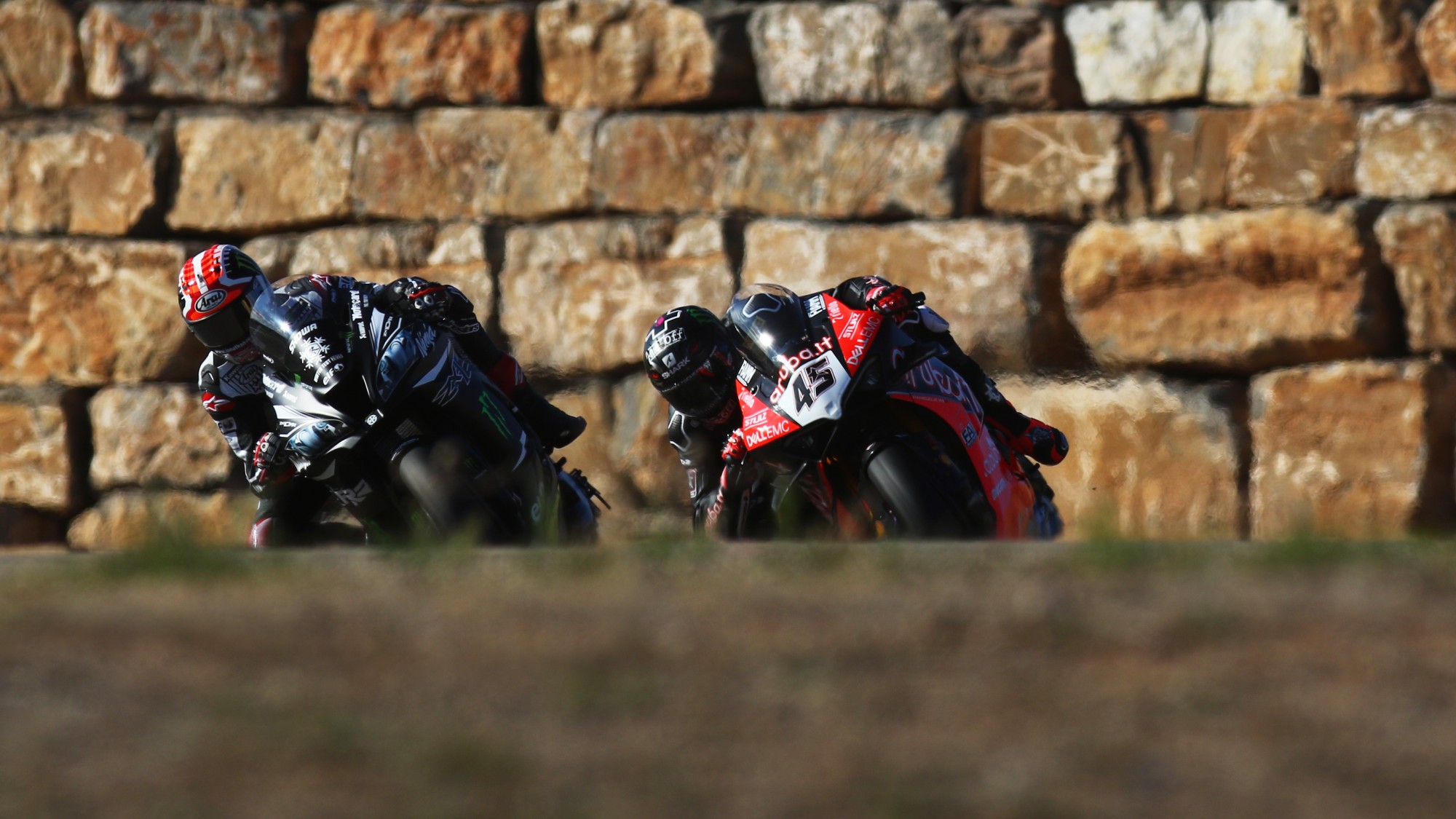 New stars shine on winter testing kick-off, with early showers giving way to blue skies and lots of action in the afternoon

The winter testing season of the MOTUL FIM Superbike World Championship has been officially inaugurated at the Spanish circuit of MotorLand Aragon, with Jonathan Rea (Kawasaki Racing Team WorldSBK) leading a nine-strong group of WorldSBK riders (plus WorldSSP300’s Ana Carrasco) on the timesheets. The Northern Irishman’s best time of 1:50.416 was four tenths of a second faster than Scott Redding who nonetheless hit the ground running on his debut with the Aruba.it Racing team.

The day began slowly, with overnight and early morning rain leaving the Alcañiz track in a drenched state. While every team was present and ready to go when the pit-lane lights turned green at 10:00 (GMT+1), no one dared to touch the tarmac until an hour later, when Carrasco took her Kawasaki Ninja 400 for the first laps of MotorLand Aragon as the showers ceased.

At approximately the same time the 2018 WorldSSP300 World Champion crossed the line for her third timed lap, came one of the most awaited moments of the past few months. Scott Redding (Aruba.it Racing – Ducati) hopped onboard his WorldSBK-spec Ducati V4 R for the first time in full Aruba.it gear. While the early laps were tentative, the 26-year-old’s times dropped progressively throughout the day – even topping the leaderboards at one point – before settling on a 1’50.868 with 51 laps completed.

For his Welsh teammate Chaz Davies, this will be the first time he can face a full winter testing season with the V4 R in proper conditions – he was still awaiting surgery on his right collarbone twelve months ago – which will be key to building a title challenge for 2020 after a fluctuating first year. Day One saw him work on new ideas concerning the chassis and electronics of his Ducati.

Completing the trio of Ducatis present in Aragon was Leon Camier on his BARNI Racing debut. The Englishman is focusing exclusively on getting to know the V4 R, before diving deeper into the bike’s configuration.

After midday, the track began to slowly dry out with times finally dropping below the two-minute mark around 2 pm, which prompted the first appearance of both Kawasaki Racing Team riders on the Spanish tarmac. Having proven that the package is as good as it’s ever been, Rea and Crew Chief Pere Riba’s focus in these early stages is on small details destined to make the bike turn a bit easier while not losing any stability. Rea suffered a crash in the session but was OK otherwise.

While their work revolves around fine-tuning the package, for Alex Lowes (Kawasaki Racing Team WorldSBK) these early laps are all about getting an understanding of the bike as a whole. The Englishman lands on a new machine and inside a new team, with new relationships inside Provec Racing just as important to develop as his feeling with the ZX-10RR. On day one at Aragon, the final three hours of the day were enough to complete 37 laps, with a best time only a second behind his Championship-winning teammate.

The manufacturer with the strongest representation at MotorLand Aragon is Yamaha, who put out all four riders – two Pata Yamaha, two GRT Yamaha Junior Team – on the 2019 version of the YZF R1, with the new 2020 model ready to hit the tarmac in Jerez, in two weeks’ time.

Toprak Razgatlioglu (Pata Yamaha WorldSBK Team) was the second rider out on track in the morning and showed that he could be instantly competitive on his new bike, finishing the day only a fraction of a second from teammate Michael van der Mark. For the Dutchman the true test will come in that Jerez test at the end of November, when he meets the evolution of his previous race-winning machine; here, on Wednesday, a few extra components including a different throttle were tested, as van der Mark and new Crew Chief Andrew Pitt began working together for the first time.

And we're go at a very damp Motorland Aragon. @toprak_tr54 is the first of the three new Yamaha #WorldSBK riders to head out and try the Yamaha YZF-R1 for the very first time...#YamahaRacing | #WeR1 | #WorldSBKTest pic.twitter.com/dVsT2CtmcU

Meanwhile, GRT Yamaha’s two representatives began to prove why the Italian team has put its trust in two rookies for 2020. Garrett Gerloff, not only racing on the WorldSBK YZF R1 for the first time but also on Pirelli tyres (and on European tarmac), was immediately competitive, coming within less than a second of van der Mark’s best time. His Italian teammate Federico Caricasulo, on a Superbike for the first time after several years on Supersport machines, recorded more laps than anyone as he finds his feet in a new class.

Track action restarts tomorrow at 10:00 Local Time (GMT+1), before the riders set off for a two-week break before travelling to Jerez.

Best times on Day One:

Follow all the best updates from winter testing with WorldSBK VideoPass!