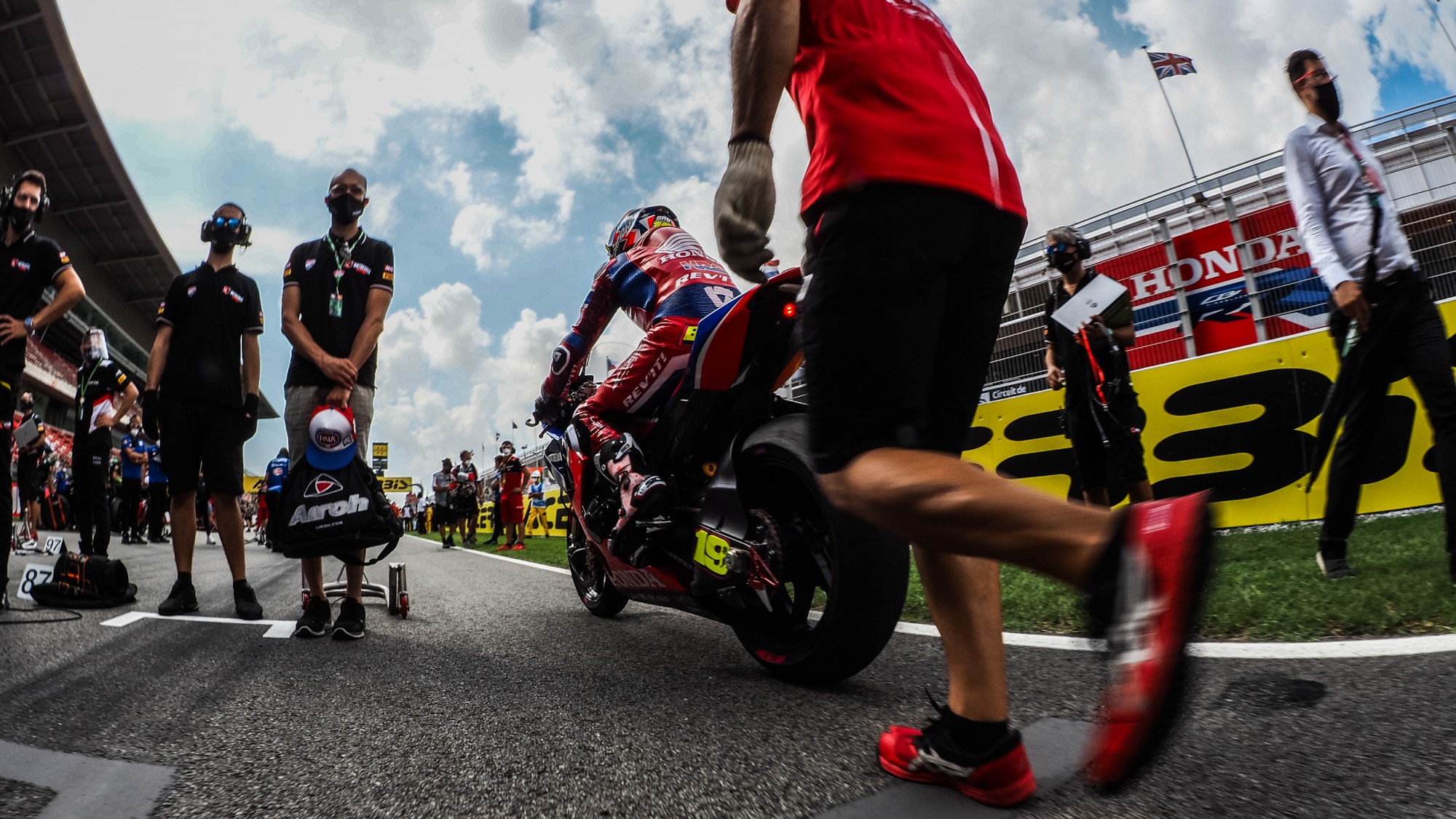 Two no-scores for Alvaro Bautista summarise the Spaniard’s Sunday well, but they do not tell the full story of his strong Catalunya Round

Alvaro Bautista’s (Team HRC) Acerbis Catalunya Round was very much a rollercoaster weekend at the Circuit de Barcelona-Catalunya as the MOTUL FIM Superbike World Championship made its inaugural visit to the circuit. The Honda rider fell on the third lap of the Tissot Superpole Race and did not finish the race, but the highside at Turn 4 at Montmelo - one of the most spectacular images on Sunday - came when he had just taken the lead. Bautista had secured a top five finish in Race 1 to show his and Honda’s potential in Catalunya, proving what an up-and-down weekend he had.

The fall led to a compulsory visit to the circuit's medical centre, where they diagnosed a fracture in his foot (fifth metatarsal). It was a severe setback, in more ways than one, for the Spaniard, who on Saturday had made his first qualifying on the front row with the CBR1000RR-R and had garnered a fifth position in Race 1.

“Today’s been a bittersweet day,” said the Spanish rider. “In the Warm-Up I was pleased with how the bike was working because we were able to fix the setup issue we had yesterday, and our feeling was a lot better. In the Superpole race I moved into the lead, the first time we’ve been able to do that, which means we are continuing to improve. I was feeling so good on the bike and to be out front again that perhaps I was a little overconfident and pushed a bit too hard, which resulted in a crash.”

Bautista was declared fit for Sunday’s Race 2 despite the fracture to his fifth metatarsal but an electrical issue on the sighting lap prevented him from starting the race altogether; the Spaniard pulling off to the track not long after he had left the pit lane.

“Physically I wasn’t feeling good ahead of race 2 but I when I jumped on my bike, I saw I was able to ride despite my foot injury,” Bautista explained after the day’s action had ended. “The pain was not too bad. But then the bike stopped on the sighting lap and so I didn’t have chance to compete at all. We’re looking into what the problem was. It was a pity because we had good pace also for Race 2 and could have battled with the frontrunners in both the day’s races.

In a year of trial and error for the new HRC project on the World Championship stage, Bautista is aware that he has to live days like Sunday, but he does not hide his desire to finish the 2020 campaign with some results that reflect the work done since beginning of course.

Bautista added: “We will take the positives of this weekend. I’m happy with the job we are doing and with our steps forward and now we’ll see if we can make the most of the final two rounds and score the kind of results we deserve.”

The Spanish rider is now in eighth place overall with 94 points. The HRC team will return to the track during the weekend of October 2-4 for the penultimate round of the championship that will take place at the French Magny-Cours circuit.

Don't miss out on the rest of the 2020 WorldSBK season by subscribing to the WorldSBK VideoPass now!