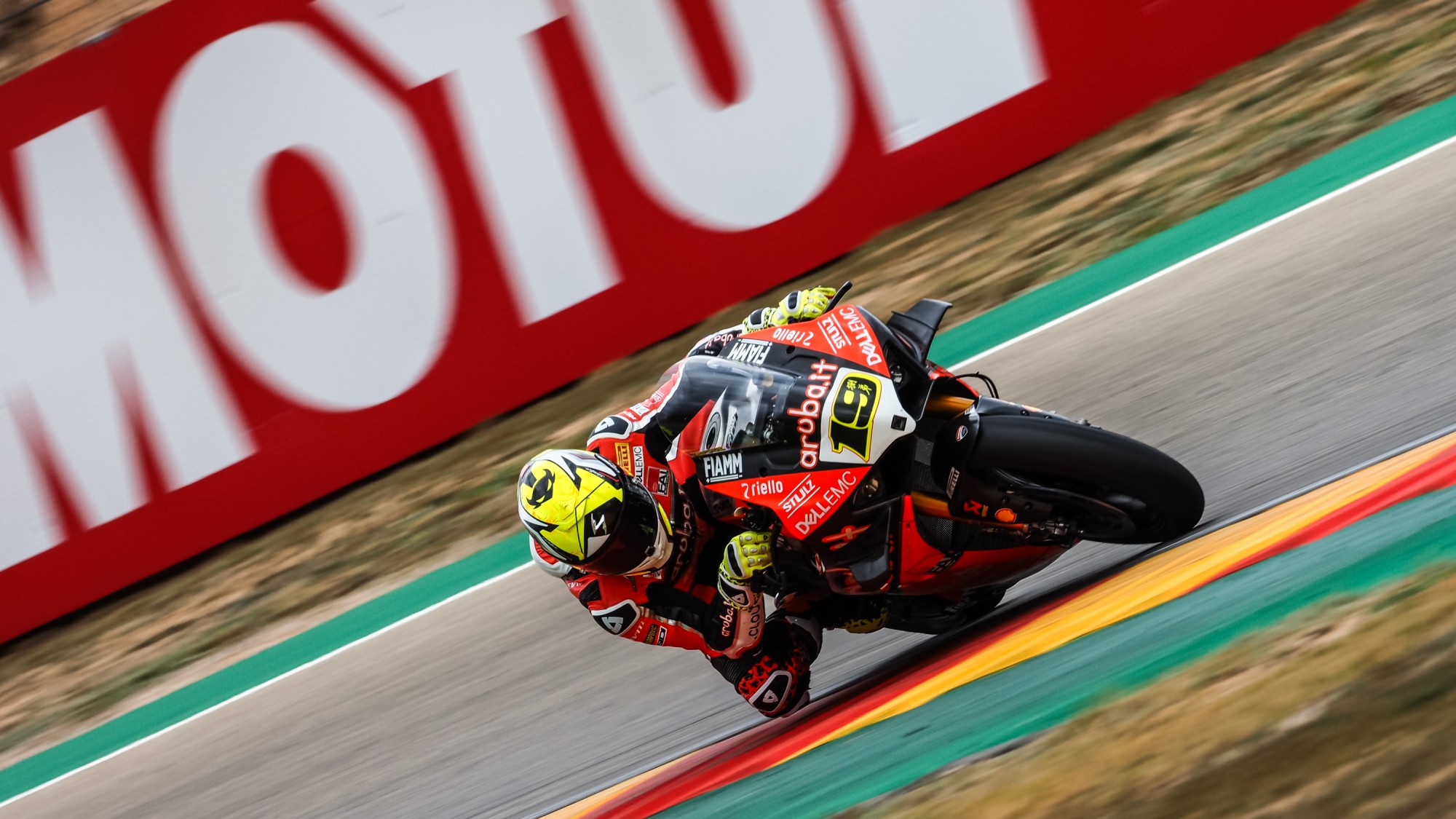 Four manufacturers lead the way at Aragon, whilst the Independent team riders also begin to push to the front!

Day one of the WorldSBK Motocard Aragon Round has been completed by the blue-riband class, with Alvaro Bautista (ARUBA.IT Racing – Ducati) heading the field once more. Times soon improved at the start of the session and riders edged closer to the outright WorldSBK lap record at MotorLand Aragon. However, rain played a part towards the end of the session, meaning there were little improvements in the final two minutes.

Bautista soon got to work, improving his lap time in the early stages of the session but initially, unable to get under the 1’49.6 bracket. Whilst having his gap slashed in half, the home-hero was still comfortably clear at the top and pushing hard throughout the session to try and improve his time. Teammate Chaz Davies failed to improve on his time and finished in ninth position. The Welshman had a few on-track issues, so will hope that they are put to bed ahead of the races on Saturday and Sunday.

Alex Lowes (Pata Yamaha WorldSBK Team) continued his strong start to the Motocard Aragon Round, improving his time to be just over half-a-second from Alvaro Bautista’s lap time. Lowes hasn’t achieved back-to-back front row starts since the Losail International Circuit in 2017 and looks set to put the record straight. Teammate Michael van der Mark however seemed subdued and was outside of the top ten for some of the session. In the final eight minutes, the Dutchman went tenth but would finish 12th overall.

Jonathan Rea (Kawasaki Racing Team WorldSBK) continued his pursuit at the front of the field, with the reigning four-time world champion putting a good lap in towards the end of the session to cement third position and just 0.023 from Alex Lowes’ Yamaha. Leon Haslam (Kawasaki Racing Team WorldSBK) had a quiet session and remained towards the rear end of the top ten, placing seventh on combined times and improving his time at the end of the session.

It was an impressive FP2 for 2013 WorldSBK Champion Tom Sykes (BMW Motorrad WorldSBK Team), who put in a blistering lap time at the end of the session to go fourth overall. With two wins at Aragon, Sykes suffered a small crash at Turn 1, losing the front end of the S1000RR. His teammate, Markus Reiterberger, had a much better session than in the morning. The German placed in eighth overall, as the BMW Motorrad WorldSBK Team continue to improve their bike’s aerodynamics, as well as dominating the sector times in sector three.

Eugene Laverty (Team Goeleven) had his best session of the 2019 MOTUL FIM Superbike World Championship, improving to fifth overall. Top Independent rider, the Irishman has continued to build on the steps he and the team made in Thailand, making for a promising European stint of the season. Fellow Independent team rival, Sandro Cortese (GRT Yamaha WorldSBK) was just a fraction off the 2013 runner-up’s pace in sixth position.

It was a disappointing day for the Moriwaki Althea Honda Team, who were 16th and 17th with Leon Camier and Ryuichi Kiyonari respectively.