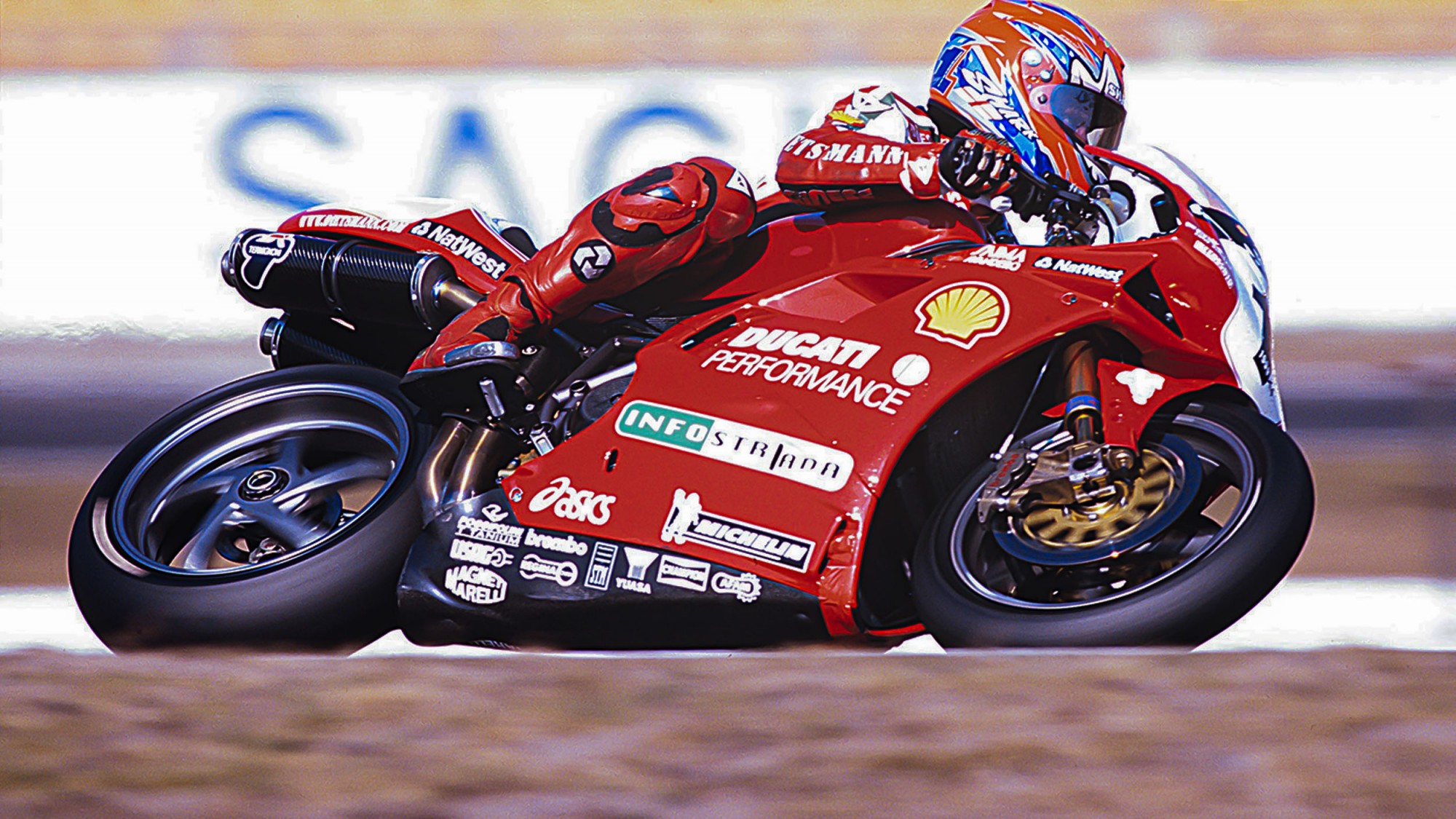 Four WorldSBK championships, 59 wins and countless memories: this is the right time to look back at the distinguished career of Carl Fogarty!

Erupting onto the WorldSBK stage in 1991 with Honda, it wouldn’t be until 1992 when Fogarty took his first win in what was still a relatively young championship. Starting on pole position at Donington Park, Fogarty took his first win during Race 1, marking the beginning of what would be a love affair with Donington Park. Competing only in the European rounds that season, he rounded out the season in ninth, with a second podium coming at Assen.

He narrowly missed out on the championship in 1993, taking 11 wins but inconsistency allowed Scott Russell to give Kawasaki the title. 1994 would be a different story however, as Fogarty became the first British rider to be WorldSBK champion. The cult started there and in 1995, it was another year where Fogarty and Ducati were unstoppable, despite the arrival of Troy Corser and the consistency of New Zealand’s Aaron Slight. 1996 would offer a whole new challenge…

Moving to Honda in a bid to achieve a championship with a second manufacturer, Fogarty had a tough season. One of his most remarkable races came at Hockenheim in Germany. Fogarty came out fighting in Race 2 and on the last lap, duelled with teammate Slight and, on the run to the line, it was too close to call. With a photo finish, it was Foggy’s first win of the season. Three more would follow – with a sensational Race 2 win at Assen - but Foggy would lose his crown and finish fourth overall.

1997 would see the birth of a rivalry with John Kocinski, who replaced Fogarty at Honda and was immediately winning. The rivalry between the two at the time was one of the big talking points of the sport and in Austria, at the-then A1 Ring, it boiled over and the two collided. Kocinski beat Fogarty to the championship but that only fired up the Brit further for 1998.

1998 would be a year where Foggy’s consistency was key. However, he and fellow Ducati rider Pierfrancesco Chili had a huge fallout at Assen, after a dramatic Race 2 – regarded as one of Carl’s greatest wins as he made the race-winning overtake at the final chicane. It would prove significant as, one round later, Fogarty took the crown for a third time. And then came the dominance of 1999…

Starting the season in emphatic style with a double win at Kyalami in South Africa, Fogarty went on to win for what would be the last time in the UK at Donington Park, with tens of thousands of people cascading onto the track in order to salute the UK’s biggest biking hero since Barry Sheene.

One of his most incredible wins would come in Race 2 at Monza a couple of rounds later, when he powered to the line fractionally ahead of Colin Edwards, although it took the entirety of the cool-down lap to give the win to Foggy, after initially going Edwards’ way. The roar of the enormous Italian crowd said it all.

From the heights of Monza to the emotional lows of the Nurburgring; Fogarty won a dramatic Race 1 after avoiding an oil spill in what was one of the most controversial races in history. A personal off-track tragedy had occurred to the Fogarty family the week before and, with a win, Foggy would declare that it was his most emotional race victory.

It would be fitting that his last ever double would come at Assen, where the annual pilgrimage of over 80,000 fans would come from the UK to support Fogarty in The Netherlands. He wrapped up his final title at Hockenheim, finishing second on the road but due to a red flag, a countback of laps meant Foggy won from Aaron Slight. It was Fogarty’s last win in WorldSBK.

Carl Fogarty’s legacy in the championship is still visible, with so many fans associating him with WorldSBK. After his injury and forced retirement, he began the Foggy Petronas team before ending that at the end of 2006.

Watch classic races and the current bunch of WorldSBK heroes on track with the WorldSBK VideoPass!