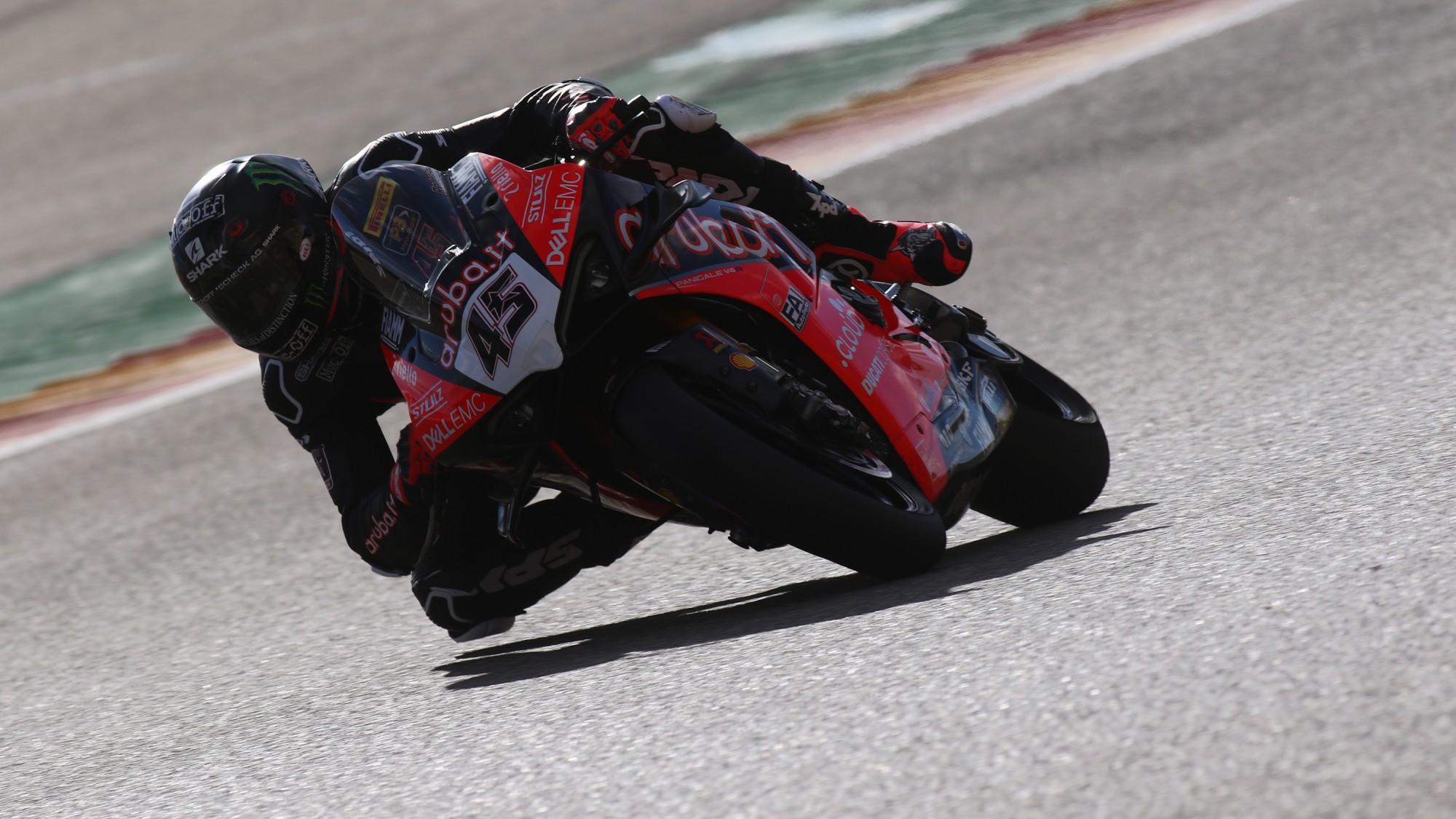 Final three hours see most of the day’s action, with Ducati dominating the timesheets

The battle lines for the 2020 MOTUL FIM Superbike World Championship have begun to be drawn after two days of testing at the Spanish circuit of MotorLand Aragon. Despite the heavily limited dry track time on both Wednesday and Thursday, the visit to the Alcañiz circuit has allowed us a first glimpse into what awaits the Championship next year, with nine top WorldSBK riders participating over the course of both days.

Many questions naturally remain unanswered; one that does not is whether Scott Redding (Aruba.it Racing – Ducati) can adapt to this new chapter in his career. The Gloucestershire rider, who was suffering from food poisoning hours before the test was due to start, finished day two at the top of the timesheets. One of just three riders to go out on wet conditions as well, Redding clocked in a best time of 1’49.929 after 60 laps, beating teammate Chaz Davies by two tenths of a second – both faster than Rea’s best time from the day before.

Leon Camier (BARNI Racing Team) was the first WorldSBK rider to set out in the morning and occupied first place on the timing sheets until the final three hours of running, yet his day was over nearly as quickly as it started. A slip at Turn 9 left the English rider feeling significant pain in his left shoulder – the same one he had surgery on last July – which prompted a quick visit to Alcañiz hospital. Thankfully, Camier was back in his garage a couple of hours later, although the day was over for him with just four laps completed.

That was four more than Jonathan Rea (Kawasaki Racing Team WorldSBK) made on Thursday. The reigning Champion already opted to skip the wet hours of Wednesday testing, and with improvements uncertain for the afternoon both the team and he decided to reschedule their programme for Jerez.

That left Alex Lowes (Kawasaki Racing Team WorldSBK) as the only rider waving the Kawasaki flag on day two. The 2019 bronze medallist already mentioned the day before that 25 dry laps were “not enough to understand the bike completely”, so Thursday’s inclement weather will not have helped. Heading onto the track shortly before 2 pm, Lowes nonetheless managed 50 laps and improved his performance from the day before, closing the gap with the leading riders and even dipping into the 1’50s. Jerez will hopefully give the 29-year-old more time to work on a set-up suited to his riding style.

Over to his old colleagues in Yamaha, Michael van der Mark (Pata Yamaha Official WorldSBK Team) continued his calm approach to pre-season while he awaits the 2020 YZF R1. A small crash at Turn 11 was the only blotch on an otherwise positive day in Spain, with 20 timed laps completed.

Toprak Razgatlioglu (Pata Yamaha Official WorldSBK Team) meanwhile – testing with two bikes and a teammate for the first time in his career – was still focused on getting more laps under his belt yet managed to improve his fastest lap from Wednesday by six tenths of a second, finishing the day as best Yamaha and fourth overall. With two riders of a similar build and both relying strongly on front-end feeling, much of the work on both sides of the Pata Yamaha garage has been in the same direction, in terms of set-up.

On the GRT Yamaha side of things, Garrett Gerloff topped his efforts from day one by a full seven tenths of a second, propelling him into sixth on the timesheets and only 0.05s behind van der Mark’s fastest time. The US rookie, testing Pirelli tyres for the first time on Wednesday, has lauded the performance of the front compound while also finding the rear tricky to understand in these early stages. Going by his Thursday improvements, the 24-year-old is a quick learner – although a nasty, late crash at Turn 2 will keep him on his toes for next time (rider OK).

Closing the timesheets from the other side of the garage, Federico Caricasulo (GRT Yamaha WorldSBK Junior Team) nonetheless closed the gap with the more experienced riders in front of him, dropping into the 1’52s. The Italian youngster has been working on electronics and his riding style, as he makes the steep jump from Supersport machinery to WorldSBK – not just in terms of power, but set-ups, braking and weight.

It's a wrap! @toprak_tr54 parks up his @PataYamahaWSBK YZF-R1 in style, after an extremely positive first test on the bike here at a very cold Motorland Aragon. He'll be back in action with teammate @mickeyvdmark ay Jerez on 28th November#YamahaRacing | #WeR1 | #WorldSBKTest pic.twitter.com/aUs8ohAisM

Ana Carrasco (Kawasaki Provec WorldSSP300) was the first non-WorldSBK rider who took to the Aragon tarmac, putting in 55 laps on day two with a best time of 2’09.070 – half a second quicker than on Wednesday.

2019 FIM Supersport 300 World Champion Manuel González, meanwhile, joined on Wednesday on a ZX-6R machine along with the championship-winning Kawasaki ParkinGO Team – with all signs pointing towards him participating in the 2020 WorldSSP championship, pending official confirmation.

The next test on their radar will be in Jerez, in two weeks’ time – one final meet-up before enjoying a well deserved winter break.

Watch highlights and reactions from the MotorLand Aragon test thanks to WorldSBK VideoPass!