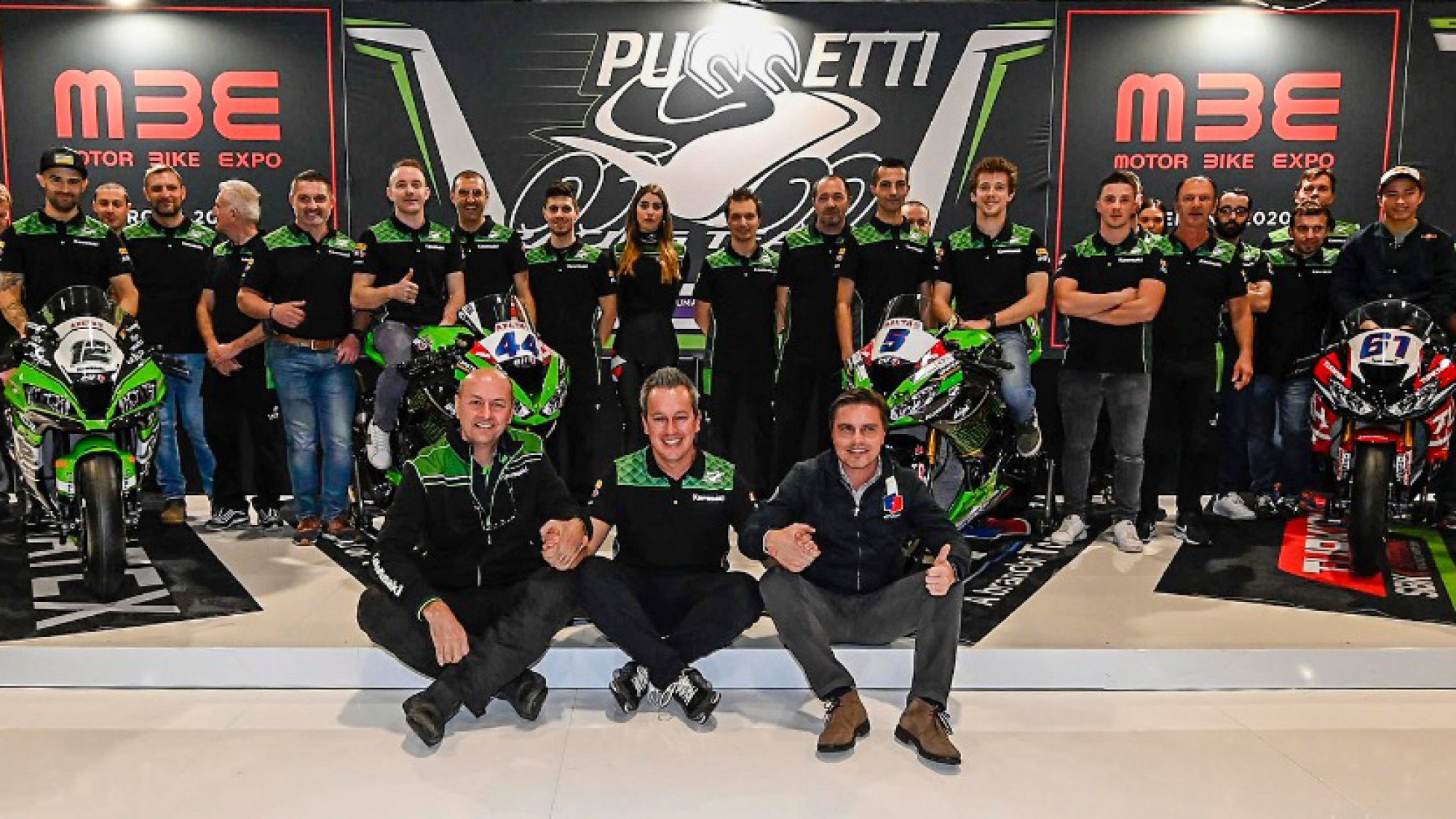 During the Motor Bike Expo at Verona in Italy, the reigning Independent Teams’ Champions pulled the covers off their challengers for the forthcoming season…

The Kawasaki Puccetti Racing team unveiled their 2020 team at the Motor Bike Expo in Verona, Italy this afternoon (Sunday), in front of a large and expectant home crowd. The Italian squad have hired former Best Independent Rider Xavi Fores for their 2020 campaign and the Spaniard has been tasked with the job of continuing the team’s success into the new decade. Joining Fores at team owner Manuel Puccetti were the team’s WorldSSP riders, with the whole team revealing its colours for the new year.

From signing autographs to being part of the big unveiling, Fores was present at the Motor Bike Expo in Verona. The 34-year-old returns to the world stage in 2020 and will hope to keep Puccetti in the battle at the front of the field. With the cover being removed, the ZX-10RR Kawasaki Superbike reverted back to the green and black livery of 2017, having been draped in Turkish red at various points in the last two seasons.

Speaking about his new ride, Fores stated: “2020 will be an important season for me and my team, in which we need to build on the good work of last year. During the Jerez test I was able to see how the ZX-10RR suits my riding style.

“There is still a lot to do of course, but we made a good start and will continue on this path at the Portimao test. My goal is to fight for the podium in every race, not an easy task but I'm sure that if me and the team work hard, we can achieve great results.”

Joining the WorldSBK rider with their presence was 2017 WorldSSP Champion, Lucas Mahias and his new teammate for the 2020 season, Philipp Oettl. The French rider was the rider to beat at the end of 2019 and will be eager to pick up where he left off at the start of the season at Phillip Island. Both riders got more miles under their belt in Valencia at the Ricardo Tormo Circuit, continuing their preparation for the new season.

Declaring his intent for the 2020 season, Mahias said: “We've just had a very positive two-day test at Valencia and the most important thing is that my hand is now almost fully recovered. Now we go to Portimao, where I will be able to ride alongside all the other Supersport riders and work with my team to be ready for round one in Australia.

“Last season was my first with the Kawasaki ZX-6R and after some initial difficulties, I was able to win and fight consistently for the podium. This year I am aiming to be competitive right away and fight for the title.”

For Oettl, he will look to build on the successful testing in pre-season and mount challenges for podiums and wins. The livery remained in the iconic green and black format, unchanged from 2019 and ready to fight in 2020.

Ahead of his first season in WorldSSP, Oettl is keen to shine: “The Valencia tests were another step forward in terms of me gaining real feeling with my Kawasaki. I can't wait to get back on track at Portimao, to line up with the other Supersport guys and prepare my debut outing in Australia. I'm really getting on well with my team, it feels like a big family. I'm sure that with their help too, I'll be able to have a great season. I want to give it my all to fight for the win every weekend.”

Also, in attendance was five-time WorldSSP Champion Kenan Sofuoglu and fellow countryman, Can Öncü, who will make his World Supersport debut in 2020 for the Turkish Racing Team, which is a joint venture between Puccetti Kawasaki and the Orelac Racing team. Sofuoglu stated that his ambitions for Öncü was to learn in 2020. Öncü will be in the resplendent Turkish Racing livery, as sported by Toprak Razgatlioglu in WorldSBK last season.

Make sure to follow all of the action across 2020 and keep up to date with the season build-up with the WorldSBK VideoPass!